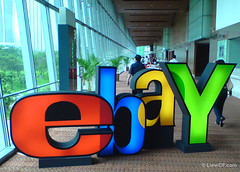 eBay announced their fourth quarter figures for 2009 tonight, and for the first time in a while, they make cheery reading. Overall net revenue was up 16% on the same quarter in 2008 – and while being up on that dismal quarter isn’t so difficult, there are more indications that eBay’s fortunes may have turned a corner.

The payments business (PayPal and Bill Me Later) was, as always, the star for eBay, reporting a 28% increase in revenue year on year. Significantly, this was the first quarter in which off-eBay payments have exceeded on-eBay payments: this is obviously the growth area for eBay, so expect to see more and more merchants adding PayPal as a payment option in future (when they get Amazon, I’ll be *really* impressed).

Marketplaces revenue also increased by 15% on the same quarter last year, and GMV (the value of items sold) increased 24%. Non-US sales now account for 60% of this revenue, and much of the improvement in eBay’s performance can be attributed to economic conditions in Europe improving. But eBay also believe their European successes are due to changes they’ve made on the site: Top-Rated Sellers are seeing their sales increase enormously (25% in Germany, 35% in the UK), and lowering insertion fees has led to a doubling of the number of items listed on the site.

This earnings call was remarkable for its frankness about what is coming next for eBay sellers. Ina tweeted that JD “hinted” that the European “low IF, higher FVF” model would roll out to the US soon: I think it was the next best thing to an announcement. US sellers, get ready: eBay think lower insertion fees work, and they’ll be coming to your site in the next couple of months, so start planning how to make this fee model work for you. There’s also something revolutionary coming to the Clothes, Shoes and Accessories category: not much detail on that, but that isn’t going to stop speculation (so leave us a comment!).

It’s been a while since I heard an earnings call as upbeat as this one: not only in terms of figures, but on where the company thinks it’s going. JD mentioned two or three times eBay’s mission “to bring buyers and sellers together”. It’s been a long time since anyone from eBay has talked like that, but it sounds like it signals a return to eBay doing what it’s good at: providing a platform, and letting the rest of us get on with business. I hope I’m not being overoptimistic.

Where will we see eBay going in the next few months? Well, we haven’t stopped talking about “the secondary market”, so maybe we do still want to be Overstock when we grow up. But there was less of that, and more – well – vision. JD spelled out three pillars on which eBay’s future rests:

The next few weeks and months will reveal what these mean in practice – but it’s safe to say, eBay isn’t quite over yet. 2010 is going to be interesting.

2 hours ago
Jonah: @rob Absolutely spot on- and further to what’s required as a seller I would like...
5 hours ago
Rob: For each transaction there are a ton of things ebay want to measure you on....
22 hours ago
SAM: I think your lucky if 15% even leave feedback these days. These days you pick...
24 hours ago
Merlo: Face palm - thank you...

See you at Small Business 2.0 on Saturday?
We use cookies so we can provide you with the best online experience. By continuing to browse this site you are agreeing to our use of cookies. Accept Read More