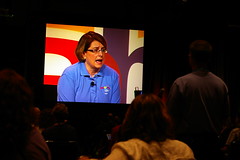 And then suddenly, it was all over. The jugglers juggled chainsaws dressed in purple velvet tights, Chris Isaak was really quite ridiculously sexy, thank you, and goodnight. They played Freebird as we left: I’m leaving here tomorrow, but Lord knows, things have changed.

Earlier in the day I went to the Q&A session with eBay’s executives for PowerSellers, effectively an extension of the Town Hall. This open access to eBay’s top management has always been one of the best aspects of Live, but something about it has changed. Finally, I believe eBay when they say they’re listening. This isn’t just about “we give you forums to complain about us and wheel out Pierre once a year to press the flesh” anymore. What I saw yesterday were eight people who, I believe, really want to make eBay a better place for all of us.

One of the questions asked by a PowerSeller and cheered by the room was this: why, when sellers tell eBay that they have things wrong, is the response inevitably ‘we know better’? Griff began the response with the eBay line that buyers were leaving the site in droves, and something had to be done to stop the exodus. While this is undoubtedly true, it’s something all sellers have heard before, and when it’s your own living on the line, it’s hard to accept. Someone needs to find a new response. And then they did.

With a passion and frankness that’s a million miles from the slick polish we’ve seen from old-school execs, Lorrie Norrington talked about how it feels to read blog posts every day that rip your company to shreds, a company where, as she put it, “people are working their backsides off to make you successful”. Indicating her fellow panel members, she went on, “there are a lot of new faces up here. We’re sorry for the mistakes of the past, come join us for the future”.

I know that there will be people reading this post who don’t want to hear this message. That’s fine, but ask yourself why you continue to do business with a company you say you don’t like, don’t trust, don’t believe in? Why, in fact, put so much effort into writing blog entries and forum posts and emails expressing your hatred of eBay? Wouldn’t it be better to put that energy into making things work, on- or off-eBay?

I’ve talked a lot this week about how the fanaticism has gone. It makes for less exciting photographs, but I don’t miss it at all. It wasn’t real; you can’t build real businesses on pins and silly hats (pin and silly hat sellers excepted). Lorrie Norrington and Stephanie Tilenius and the rest of eBay’s management are making something new, something that has a future, something that I for one am intensely proud to be associated with.

As the guy in yesterday’s Town Hall put it, “by the way, Lorrie rocks”.

1 day ago
Fred amith: Basically fedex.shouldnt have bought tnt with their shit freight and shit infrastructure and shit staff...
3 days ago
ID: The Pitney Bowes report is based on PARCEL volumes, so how can you discount Royal...
3 days ago
R: ah ha we stand corrected, were with andy on this what clown...
3 days ago
stuartfrvs: Very much a rose-tinted glasses type of view - in no way objective. His job...

Live Town Hall: it's all about the feedback

eBay Canada 5c listings if you specify shipping
We use cookies so we can provide you with the best online experience. By continuing to browse this site you are agreeing to our use of cookies. Accept Read More